This is the weekly newsletter of OptOut, a news aggregation app for exclusively independent media that's currently in beta testing for iOS (download it now!). Find out more about the app at optout.news.

We could really use your help in spreading the word about OptOut as we prepare for launch. We'd be grateful if you can forward this to your friends and family and share it on social!

Please help us launch this app. We need to raise funds to pay for curators, developers, and marketing for our public launch in early 2022 and to make OptOut sustainable into the future. Because we are a nonprofit charity, all recurring donations through this newsletter and all other types of donations are tax-deductible!

We're back to our regular schedule of Weekend Picks from the 100% independent OptOut news network!

So far, we've recruited 115 digital news sites, podcasts, and video channels for the network and our OptOut app. We're excited to share their work with you in the iPhone/iPad app, which is now in public beta testing! Please download it here and send us your thoughts.

Sincere thanks to all who donated to the OptOut Media Foundation last week for Giving Tuesday. We didn't quite hit our goal, but we get a good boost. Your contributions, however large or small, all make a huge difference for us. Plus, a few generous checks came in the mail that will allow us to hire more news curators and help us market the app.

That said, we still need to raise a lot more money to get us through 2022. With an all-volunteer development team, we've put together a sophisticated news aggregation app that hundreds of people are currently testing out. We're a charity, and we want to keep everything free—all features of the app, this newsletter, and what's to come—but in order to do this, we need more recurring donors. Apologies for the frequent requests; we wouldn't ask if we didn't really need your help.

The more money we raise, the better we'll be able to achieve our goals of widely distributing vital content about the people and issues that matter from so many independent news outlets and, over time, advancing racial, social, environmental, and economic justice.

Please make a tax-deductible donation today to take on the corporate media and ethically inform the public about what really matters.

Before we get into our weekly independent news roundup, I want to draw your attention to a remarkable video by musician Benn Jordan (AKA The Flashbulb). Over 20 minutes that are well worth your time, Benn explains how (now "former") New York Times investigative reporter Ian Urbina got hundreds of composers to write music—for free—inspired by his journalism, promised them big promotional deals with Netflix and other companies—which didn't happen—saying they would surely provide them income, and has been collecting royalties on thousands of songs he didn't write. There are a lot more damning details that you'll find out about as you watch. It's clear that Urbina and his wife have conducted themselves highly unethically, despite Urbina's current attempts to rewrite history and dispute the video. I'm simply amazed this man would exploit so many people so blatantly.

What this means: In many red states, banks and investment firms that have divested from oil, gas, and coal won't be allowed to manage pension funds or receive other government contracts. At a time when climate change is rapidly accelerating and environmental disasters are proliferating, the political right has decided not only to continue denying climate change, but to penalize private companies that have decided to acknowledge and do something about it.

The Drilled podcast's latest episode covers Australia's disappointing plan to boost fracking and plastic. The country is aiming the drill for gas in basins on Indigenous land.

The effects of climate change will likely cause more trash debacles like the one in New Orleans in cities around the U.S., reports Scalawag.

On this week's WhoWhatWhy podcast, Dr. Sandro Galea, dean of the Boston University School of Public Health, explains how the U.S.—where people spend almost 40 percent more on medical care than any other industrial nation and die younger—was a sitting duck for Covid-19.

If we had been a healthier nation to start with, he says, we would have had a very different pandemic. We are overinvested in treating conditions of aging in those over 70, and underinvested in the forces that keep us healthy from a young age.

Conspiracy theorist, "force the vote" crusader, and Tucker Carlson guest Jimmy Dore continues his bizarre and nonsensical Covid-19 misinformation. One one segment, which included fellow pandemic conspiracist Max Blumenthal, Dore was up in arms about journalist Ryan Grim getting a booster before spending Thanksgiving with his family in order to reduce the chance he infects them with Covid-19. Because the vaccines definitely reduce the likelihood that you'll contract Covid, getting a jab obviously decreases the likelihood that you'll infect others with Covid, but that's a little too complicated for Dore and Blumenthal to wrap their heads around. This would be funny if it wasn't incredibly dangerous, as Dore has a big following and clearly enjoys misinforming people for money.

Matt Binder has more on this shitshow.

...and his appearance on Breaking Points!

The American Prospect has what I consider a pretty humorous piece about ex-Twitter CEO Jack Dorsey's philanthropic habits. Apparently, nonprofit professionals are outraged that the billionaire hasn't hired enough nonprofit professionals to help him vet potential grantees. While Democratic megadonor Jim Simons has a staff of 400 at his family foundation, Jack's got...two employees.

On the Tech Won't Save Us podcast, Morgan State University professor Fred Scharmen breaks down Elon Musk and Jeff Bezos’ visions for space colonization, the inspiration they draw from the work of Wernher von Braun and Gerard O’Neill, and what’s wrong with basing our future on those ideas.

Yours truly appeared on The Rational National to discuss my reporting for Exposed by CMD on Bari Weiss' "fiercely independent" aspiring university, which is led by a cohort of jilted writers, canceled professors, and Koch-funded think tankers.

Try Out the App!

The first few weeks of beta testing of our Apple app have gone well, and we've opened up a lot more slots for beta testing! If you'd like to help us improve the app before our public launch in early 2022, please download the iOS app right now. We really appreciate your help!

You Love To See It: OptOut participants The Appeal and New York Focus collaborated on a story about a 58-year-old man who is in prison for stealing cold medicine. Reginald Randolph's health is deteriorating, and progressive state senators are trying get him adequate treatment and prevent him from dying in jail by asking the New York governor to commute his sentence.

Read it at The Appeal or at New York Focus:

Thanks to GOP presidents and Mitch McConnell, extreme rightwingers have a 6-3 majority on the Supreme Court. Few issues animate the far right more than a woman's ability to make her own health decisions, and it looks like the Court will weaken, if not throw out entirely, Roe v. Wade. Thus, we've entered scary territory, where abortion could be banned, effectively or entirely, in many red states quite soon.

In Prism, Ashton Lattimore takes down religious zealot and Justice Amy Coney Barrett's absurd argument that because of adoption, a pregnancy is merely a "narrow burden" on women.

For far too many pregnant people in the U.S., especially Black women and other women of color, carrying a fetus to term results in the most permanent and final body change of all: death.

The Markup details the huge racial bias of crime prediction software used by police. Check out the article and it's very cool interactive graphics.

Tim Black says, "The Democratic Party needs us, but they don't respect us. The Republican Party hates us and they show it."

OptOut is getting ready to launch the public app very soon, and we could use your help. Please consider making a tax-deductible donation to the OptOut Media Foundation today! Thank you so much.

Thanks as always for following the great work of OptOut's numerous independent news outlets! See you soon.

Press Freedom Threatened, Covid Disinfo From the 'Left,' and Web3 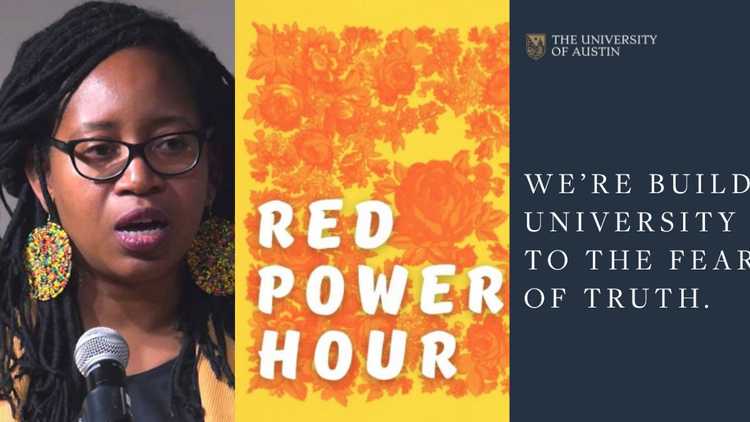